September In The Lakes

The September Event was held at Skelwith Fold Caravan Park, Ambleside in the Lake District. It was hosted by Pam & Andrew Tillotson, assisted by Katie & Graham Bull.   Andrew had forecast that there was no sunshine on the horizon but when we drove towards Windermere the sun shone, although it had disappeared before we reached Ambleside. Very detailed instructions had been issued so that there were no excuses for getting lost or having a divorce on route. For once our sat-nav agreed with the instructions.

At the site reception we were given the usual paperwork and directed straight up the hill with the assurance Pam would be waiting. Sure enough the team were waiting with drinks and biscuits, now a famous trademark of Pam’s. It was high noon and a procession of Vanmaster caravans were efficiently directed to their hard standing pitches. In the evening there were a couple of impulsive gatherings in awnings and caravans.

Skelwith Fold Caravan Park has been developed in the grounds of a country estate in amongst mature trees and shrubs. There are 300 privately owned caravan holiday homes and 120 touring pitches. The toilet block has the usual facilities to a high standard, including laundry, drying and ironing rooms.  The heated floor made us feel at home in our Vanmaster.

The weather forecast continued to be as Andrew had predicted. Pam had used her crystal ball and had arranged a walk for the following morning. She obviously has powers none of us posses because at 10.00am the damp weather dried up and remained so for the morning. Some 18 of us commenced the walk from the site mainly along a minor narrow road, 1.5 miles to Brathay Holy Trinity church hall. Along the route a slight deviation to a panoramic viewpoint information sign showed us what could be seen on a clear day. We only had a view of interesting cloud formations and mist in the valley. Later in the week a picture was taken to show what we missed and can also be seen below. 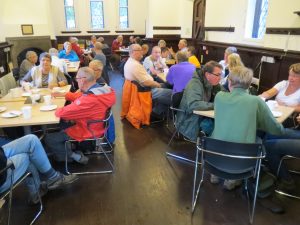 The church hall had been warned we were invading and were well prepared. An advance party of non-walkers had already taken up their places and a very efficient team soon provided hot drinks and scones with butter and jam. The 1.5 mile return walk was along a gravel footpath, which lead to the site entrance from where we walked back to the caravans.

The Welcome evening was held in the site function room. Pam & Andrew welcomed everyone and went through the necessary information and the programme for the event. Lots of local information was made available so members could make their own minds up what they wanted to do. To our surprise Andrew suddenly burst into voice and read a poem “The 1st Time” which was received to rapturous applause. It was their first Main Event as hosts.

It was well known by now that Jack & Anne Hartley and also Andrew & Anne Kirkhope had been continuous members of the Caravan Club for 50 Years and had received their plaques. They were each presented with a card from the Association. A full report with photographs of their achievements will be contained in a future article.

Several hardy members continued their passion for walking no matter what the conditions were. They seem to take the weather as a challenge. Other members also took up a different challenge and were seen at the Lake District top tourist attraction, “LAKELAND”. Another attraction that members conquered was “HAYES Garden World”. This was nothing like a garden centre but more like a retail shopping mall surrounding a garden. 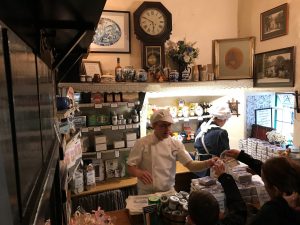 The Grasmere Gingerbread shop was also a must visit establishment. I am pleased to be able to report that everyone survived the challenges although some had to lighten their wallets in the process.

The social evening in the site function room was a Beetle Drive. There were 18 couples participating to construct 12 Beetles. It was an evening of deep concentration, excitement and frivolity. After a tense period while the scores were added, Pam then revealed the totals on the white board. Andrew announced Bill & Pam Adlington were second and Edward & Susan Sellars were the winners. A presentation of prizes followed with Bill & Pam receiving a Beetle and Edward & Susan a model VW Beetle Car mounted on a plinth with an inscription “Beetle Drive Champions”.

A coffee morning, not to be missed with Pam’s table of cakes and of course chocolate biscuits was attended by 34 members who squeezed into their awning. David and Judith Dewhurst, past members also visited. 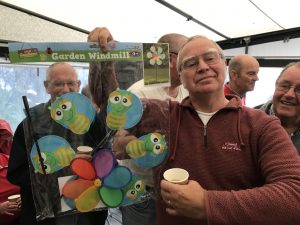 During the morning the results of the Creepy Crawley competition were announced with Richard & Christine Badcock being the winners of the prize. Dennis & Laurel and Nigel & Helen were 2nd and 3rd respectively. Jack and Anne Hartley were also presented with a card of congratulations for their 57th wedding anniversary.   Campanologists, Edward & Susan made up a team of bell ringers and rang in the morning at the nearby Brathay church to celebrate the occasion, (well that was their story, it just happened to coincide with a church service).

In the afternoon Jack & Ann celebrated their wedding anniversary inviting everyone to join them for drinks and nibbles.

Tom & Angela McCarthy, arranged to lead a walk for those who did not like retail therapy. Pam used her crystal ball again with great success again to choose a day when the weather was essentially dry. It was a 5.6mile circular walk shown [HERE] with 12 hardy souls starting from Elterwater, Britannia Inn. The previous nights heavy rain flooded the path alongside the Great Langdale Beck making walking a little difficult. Maureen Wallis had no hesitation stripping off to negotiate the water, (she took her socks off). It was a beautiful walk alongside the river, through forests and over the hills giving really magnificent views of the Langdales. On the route there was of course a lunch stop at “Chesters by the River” at Skelwith Bridge. It was only spoilt by having to walk through the shop to find the toilets.   Several other members joined us at the café.

The evening meal on the last night was held at the Skelwith Bridge Hotel. Pam & Andrew had tested the menu on several occasions I was informed. The “Chocolate Bomb” dessert was highly recommended by them and proved very popular. The food was very good and the service well organised.

Pam & Andrew were thanked by all for the hard work that had been put in to make the event such a success. Katie & Graham were also thanked for starting the ball rolling so to speak and then handing over to Pam & Andrew. It was a pity the weather was not as kind as they would have liked, but this did not dampen the spirits of all who attended.

The Event was a great success and enjoyed by all who attended.