This is an excellent site, run by South Dublin Council and the only one inside Dublin. It is relatively easy to find, and easy to get sited, as the pitches are large and the roads quite wide. The staff in the office, like many people in Ireland, are very friendly and helpful. 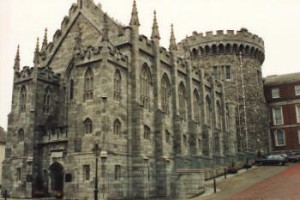 We stayed here twice during our trip to Ireland, once on our first night for just one night and then again at the end for 3 nights.

This site is very nicely laid out, with large, mainly hedged pitches which have electricity, water and waste, with a separate area for tents. The one large toilet block is a fairly old, and will need a makeover soon, but very clean. The whole site is well-maintained, with flowers and well kept grass. There is quite a lot of tourist information in the office, and there is free wi-fi, which extends to part of the pitching area. It is a fully open network, therefore not very secure, but usable. 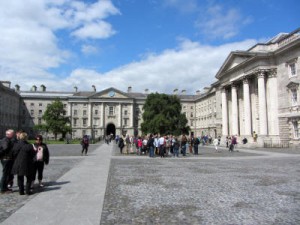 One thing to be aware of are the tolls on the M50 motorway around Dublin and on the tunnel through to the port. There are relatively expensive, but there are no toll booths for the M50. Like entering the London Congestion Charging Zone, your number plate is recorded and you have until 8pm the next day to pay, either on the Internet or by phone. The charge on the motorway is €3.00 for a car but is the same price if towing a caravan. For the tunnel there are toll booths and for most of the day the toll is also €3, but from 6-10am southbound and from 16:00-19:00 northbound the toll is €10, so if heading for the 08:10 ferry you need to pay the high charge or if getting off the 14:10 from Holyhead.

From outside the site gates, there is a bus-service in to Dublin, which is not too frequent, but it means you do not need to move the car at all. You can drive about 2 miles and catch the Park & Ride on the trams. We found this the preferable option. It is well organised. It is signed off the main N7 road (watch for the turn off, it is a little unexpected, prior to the 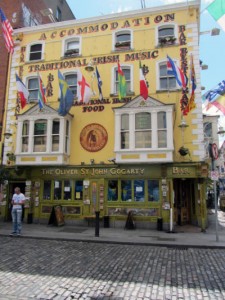 M50 turn). This takes you to the Red Cow Park & Ride. Parking is €2 for up to 4 hours or €4 for 24 hours. You make a note of your bay number, and pay at a machine either in the car park or on the tram platforms. You insert the Bay number before the coins. You get a receipt, but there is no need to display this in the car. You then have a choice of tram tickets to the central area, which is €2.20 single, €4.20 return, or €6.30 for an all day ticket, use as often as you like. The trams are approx. every 10 mins, off peak. The tram takes you right in to the centre of the city. Get off at Abbey Street for O'Connell St, Trinity College, Temple Bar etc. The end of this line (the Red Line) is at The Point, which is near the docks and the O2 Arena. There is a slightly nearer park and ride to the caravan site, but the trams here are less frequent. If you prefer to drive in to Dublin, there are car parks, and the cheaper ones are North of the river. Expect to pay about €12 for the day. [Prices were correct in July 2012]

The caravan site is on the edge of a large park, which gives places to walk, so you can take a stroll in the park as well as explore Dublin.

There are a huge number of things for a tourist to see and do in Dublin. Rather than list them here, particularly as we spent only one day and one evening in Dublin (we saw some friends on our other day on the site), the best advice is to visit the Dublin tourist board website [go].

One of many attractive streets

However, do not miss out on Trinity College, which is fabulous, Temple Bar which is interesting and entertaining, and of course the shopping, which has the usual shops, but also has a lot of shops you do not see elsewhere. Even if you are not a regular user of pubs, you must go in to two or three here. There are some really interesting old pubs, with very quaint features and decoration.   The Guinness, is of course, very good, and you can also watch the traditional Irish music and singing.

Next time we come across the Irish Sea, we will do southern Ireland, but it will take a little while to pluck up the courage to brave the rain again! Great place, shame about the weather.

However, one thing we learnt, never believe the weather forecast. In Dublin, we actually had two nice days, with sunshine and no rain, despite the forecast saying showers.

Wherever you are you get in to some interesting conversations with these friendly people. On our last trip in to the centre on the tram, I was "chatted up" by a fascinating woman, who looked a little older than me, but she was on her way home from a night shift as a part time mid-wife. She had delivered 16 babies during the night, 12 boys and 4 girls. She told me her "business was booming" since the recession had begun. She said the people have to have something to do! She kept saying "your wife will think I am trying to steal you". Frances couldn't hear what she was saying, as she was sat opposite. Probably a good thing, as I learned some interesting things!