This caravan site is 25 miles south east of Tours in the western Loire region.  The site's own website can be found from this link  www.lacitadelle.com

This 4ha site nestles at the foot of the city walls of the medieval town of Loches, it is about 500mtrs walk into the town via a pathway just by the site entrance through a park and into the town without the need to negotiate roads traffic and park cars etc.

Access into the site is straight-forward with wide open tracks to pitches.  There are a variety of pitches sizes from 100m to 240m open or shaded with the option of paying a supplement for extra size pitches or the deluxe pitches 150m with all facilities.

In 2012 they have introduced some new style pitches with 180- 200m2 with exceptional view of the town, includes a chalet with small fridge water garden 2 sunbeds parasol BBQ free Wi-Fi.

Loches lies on the banks of the Indre river with beautiful medieval buildings, a castle, winding streets with pretty shops and many cafes and restaurants.

Loches is described as one of the most picturesque towns in central France, it has a tourist train which is a must to take you in and around the narrow steep winding streets to see the main sights.

Tours is the largest city in central France with its old town of Plumereau old half timbered buildings as well as the newer parts of the city . In 1940 the French government was based here.

Caution when approaching the site with your caravan.  Do not let Sat Nav take you through the town centre, as it is completely unsuitable for caravans, and they are banned.  Take the ring road (D943) right around the town to the South side, where there is a L'Eclerc supermarket on a roundabout, and then take the exit for the town centre.  The site is on the right in 800 metres and is signed.

As this is in the Indre-et-Loire, the west of the famous Loire Valley there are numerous very picturesque Chateau's to visit e.g.  Villandry, D'Amboise within a short distance of Loches.

The historic town of Loches is one of the lesser known gems of the Loire region.  Steeped in history it is dominated by the magnificent ‘Cité Royale’, parts of which date from the 11th century.  There is much to discover in Loches itself, but the town provides the perfect base from which to visit many of the Loire’s most memorable Châteaux.  Chenonceaux perhaps the most famous of all is just a 30 minute drive away. Also close by is the smaller château of Azay-le-Rideau, often called the most romantic of all the Loire’s châteaux.

If you get tired of châteaux you can spend a day or two exploring the fabulous vineyards of this beautiful region.

The town lies at the foot of the rocky eminence on which stands the Château de Loches, the castle of the Anjou family, surrounded by an outer wall 13 ft thick, and consisting of the old collegiate church of St. Ours, the royal lodge and the donjon (the keep).  The church of St. Ours dates from the tenth century to the twelfth century; among its distinguishing features are the huge stone pyramids surmounting the nave and the beautiful carving of the west door.  It contains the tomb of Agnès Sorel.

The royal lodge, built by Charles VII of France and once used as the subprefecture, contains the oratory of Anne of Brittany.  It was here on 11 May 1429 that Joan of Arc arrived, fresh from her historic victory at Orleans, to meet the king.  The donjon includes, besides the ruined keep (12th century), the Martelet, celebrated as the prison of Lodovico Sforza, Duke of Milan, who died there in 1508, and the Tour Ronde, built by Louis XI of France and containing the famous iron cages in which state prisoners were confined.  Loches has an town hall and several houses of the Renaissance period.

Places to Visit Nearby

This chateau is just 18 miles from Camping la Citadelle in Loches.  It is well worth the short drive. 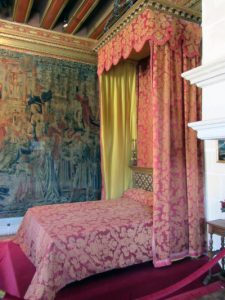 The chateau is known as the "Ladies Chateau". That is because the biggest influences on it have all been women.  It is a fabulous Chateau, often referred to as "the most romantic chateau in the Loire", which has one part on one bank of the River Cher, and then has another part built over the river itself.  Diane du Poitiers (1499-1566) was the mistress of King Henry II.  She decided that it would be a good idea to build a bridge across the river, so that they could enjoy the hunting on the other side of the river.  She had the bridge built, with impressive buildings on it.  She was given the Chateau when Henry died, but his wife, Catherine de Medici managed to get her out of the Chateau with various promises and another chateau to live in.  Catherine enlarge the bridge, making a large "salon" on the bridge with large windows, where dances and other social events could be held.

The chateau has one room called the Room of the 6 Queens (pictured right).  This is the room that was used by 3 of Henry's daughters and three daughter-in-laws.  One of these was Mary Queen of Scots. 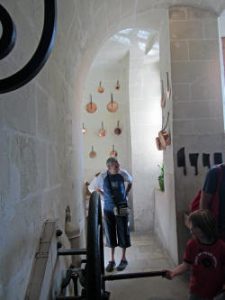 The Chateau played a part during World War II.  The river was the border between occupied France and Vichy France.  Some times the chateau was used to give resistance fighters and others hidden passage across river.  The Germans had a unit ready to destroy it, if needed.

The involvement of women continued up until the First World War, when the Chateau was used as a hospital for injured troops.  One other woman who lived in the Chateau for a while was Mary Queen of Scots.

There is a lot to see in the Chateau, and for €4 you can rent an i-pod video guide.  This is like the usual audio guide, except that you also get images as well, which provide extra information, but also make it easy to identify what you should be looking at for any part of the commentary.

The chateau was a little busy when we visited, as it was a Sunday, and it made the length of the commentary on each room a little long.  Each commentary lasted around 6 or 7 minutes and sometimes it was too long to stand with so many people around, however, on a week-day, if you wanted to listen to it all, then it would not be a problem.  We found this a superb Chateau, with interesting furniture and the gardens were well maintained and very interested.  There is also a maze, a  16th century farm, a wax works and other attractions.

Entry price was €11 for the chateau and gardens, €4 for the video guide, and extra for the wax works.  There is no discount for seniors.

This is listed as one of the 10 prettiest villages in France, and is just 11 miles from Camping la Citadelle in Loches.

We spent a couple of hours there, although if you go inside the chateau the visit would take longer.

It is a small compact village and very pleasant, dominated by the castle built high up on an outcrop.  These photos were taken from the river walk, which in July and August is illuminated each night, along with the chateau and other parts of the village from 10pm to midnight.