This is an excellent site.  We visited it in June this year for 6 nights and had a great time.

It is actually a franchised site.  It is owned and operated by a family, who are very friendly and helpful, but it is marketed and booked through the Camping Club, and everyone wears C&CC uniform, etc.

The site is beautifully laid out on a hill in among the trees, with all pitches for caravans and motorhomes being hard standing and fairly level (usually level left to right, with a slight slope front to back).  There are separate pitches on grass for tents.  Like most C&CC sites they allocate you to a pitch, and certainly the pitches are different lengths, so that is needed, but a word of caution.  The pitches to the left of the entrance gate 32 – 35 are nice large, flat pitches, but they do not get any sun at all, due to the trees.  We were on one of these pitches and one day while we were there, it had been a beautifully sunny day, although with a slightly chill North East wind.  We had been out walking and it had been lovely.  We got back to the site, and I walked round it, and there were people sat outside, and several men were sunbathing in just shorts, albeit sheltered from the wind.  Our van was so cool inside, the heating came on!!  If you get the chance, try for a different pitch.  Our neighbours had found the same problems as us.

The toilet facilities are very clean and well maintained and the site office sells a small range of groceries and other essentials, with a larger range than most reception shops, which is very useful as there is no shop in the village, and the nearest supermarket is 15 miles.  There is a convenience store just under 3 miles away on the main road north of the site at a petrol station just before the village of Holmrook and a bigger one in the village of Gosforth some 7 miles away.

This is a beautiful spot for a relaxing few days.  Ravenglass is the only village within the Lake District National Parks which is on the coast.  It is where the Lakes meets the Sea.  The site is on the edge of the village, and yet only 5 minutes walk from the centre.  It is a very small village, but very attractive with some fine old buildings, and a nice attractive beach area.  There is just one shop in the village, a Post Office, but it only sells things like ice creams, rather than any food.    There are three pubs/hotels in the village, all of which carry a good range of real ale, so if you like your beer, then you have plenty of choice only 5 minutes walk from your caravan.  They all serve meals.  One of the pubs, The Ratty Arms, is actually housed in the old station buildings (the line still operates; it just no longer needs the building).  This pub is in the Good Beer Guide, and offers 7 different Real Ales (probably reduced in winter).

Of course, this is the home of the Ravenglass and Eskdale narrow gauge steam railway.  It also has the Furness Line, which has a regular train service from Carlisle to Barrow in Furness.  This has a service approximately hourly for much of the day, with no service on Sundays or in the evening.  The line runs along the coast for much of its length and had some spectacular coastal views.

The Ravenglass and Eskdale Railway is excellent.  Your day ticket (£12 per adult) enables you to travel the line as often as you like in the day.  Some people take several journeys.  We took just the one, but well worth it.  The line rattles along 7 miles of 15” gauge track to Dalegarth, with several intermediate stations if you require.  Again the trains run roughly every hour, although there are some additional trains at times, and the service is more frequent during the school holidays.    Once at Dalegarth, you are at the foot of Scafell Pike, England’s tallest mountain (978 metres), plus you have the delightful River Esk with its waterfalls and stepping stones. 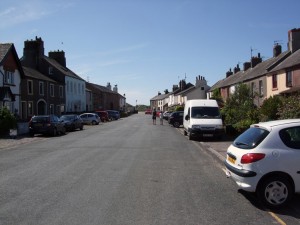 Some people simply get off the train look around for half an hour and go back.  That’s a shame.  Many others take the half mile walk to Boot.  This is a small village, with Britain’s oldest working watermill, some attractive old buildings, and two pubs offering lunch.  The Boot Inn has an attractive garden and does a good hot steak sandwich.  The village is also a good place for the energetic to start the climb up to Scafell Pike.  The footpath starts here to the summit.  It is a 7km walk each way and rises from some 40 metres above sea level to the 978 metre summit.  We walked a little way along the path, but actually had no intention of going all the way.

There are some nice paths along the banks of the river, which are much less energetic than a walk to the top of the mountain, and has some beautiful scenery.

Close to the site are the ruins of an old Roman Bath House.  It is run by English Heritage, and is free to everyone, as there is only a few well-preserved walls left, but it only a 10 minutes stroll away.  Of course, there is plenty of walking, and the Cumbrian Coast path runs past the site.  We found the Southern section well overgrown and difficult to follow at times, but I think after the prolonged rains, and being June, it had not had many users.  The section to the North, which crosses the estuary on a footbridge attached to the railway bridge, was much easier to follow and takes you up to the small resort of Seascale about 6 miles away.

Of course, a short drive takes you up to the Lakes.  Coniston is not far away and lots of attractive Lakeland Villages.  We made a special trip to Cartmel, which as well as being a beautiful village with a 12C priory, it is also home to Sticky Toffee pudding.  It was first developed here 20 years ago in the kitchen behind the old post office.  The shops sells puddings and jars of sauce today.  We bought a couple of puddings, and they were absolutely delicious.  Much better than I have ever had in a restaurant.

We took the train to Whitehaven.  The line crosses the estuary as it leaves Ravenglass station, and then travels mainly along the coast.  You do not catch these trains for speed.  The longest it travels between stations in 9 minutes, and sometimes only 3 minutes, but the coastal views are good.  There is one stretch with an amazing collection of old houses actually built right on the shingle, with seemingly no protection from the sea.  Whitehaven is interesting.  It was once Britain’s biggest sea port.  That was long ago, and now it houses mainly pleasure craft and a small fishing fleet.  They have been renovating the port area, and it is looking much better, and work is still ongoing.  At the southern end, they have made an excellent job, with a new museum, and a really good start to the coastal path, as it winds up the hill to the top of the cliffs.  They have restored some old building and built a monument to the miners, who use to work down the pits here.    The town is a little run-down, but there are some places on interest in it, and it is worth a look around.  We took the opportunity at the end of our visit to go in to the Tesco supermarket which is so close to the station you more or less have to walk though its car park to the get to the station.  Since the station in Ravenglass is only 5 minutes walk from the site, it was a good way to stock up.

I suspect that the train ride south towards Barrow gives better coastal views, but we never had time for that, but Barrow has an interesting new Dock museum about the heyday of ship-building in the town, and an island that has a nature reserve on it.  Millom, which is not as far as Barrow, is a little run-down and does not appear to have a lot for the tourist, although there is a nature walk, where the ugly iron works once stood.

Also running past the site is the long distance cycle route, the Hadrian’s Coast Way (route no 72).  We used it to cycle to Seascale.

St Bees is worth a visit, some 13 miles north of the site.  It has a historic public school in attractive old buildings, a very nice old church, and a very nice beach area.  However, there is a very good walk over St Bees Head that starts from the beach.  Also starting from the beach is the famous coast to coast long distance walk.  There is a large sign that tells you all about it at the start.  .  It also has a station, so you can visit on the train.

Overall, we had an excellent few days here and really enjoyed our visit.  Obviously, being on the edge of the Lakes you can enjoy the best of both worlds, but you also have to match your activities to the weather.  We did a tour in the car on one poor day, but then sadly, once we got up on to the fells, we could see absolutely nothing in the cloud, but we soon managed to escape.