"This place is France's Best Kept Secret".  That was the comment from Glyn, a near neighbour while we were staying at Camping Cadoret, in Fouras, which is the seaside resort of Rochefort in Western France.  Glyn is one of those "larger than life, always cheerful and very noisy people, with an opinion on most things", but is he right? 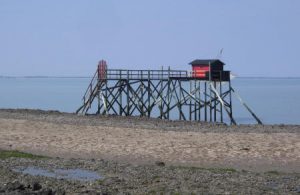 He did not just mean the camp site, although it is an excellent municipal site with our caravan just 100 metres from the beach (although it takes longer to walk, as for security reasons, these days, there is no longer a beach gate), but the whole area of Charente Maritime.  There is a lot going for it.  Beautiful beaches, soft sand, lots of interest, excellent seafood (this is one of the major oyster and seafood areas of France), but one of the key things for Glyn, who has been coming here for a number of years for his annual holiday is that the weather is generally very good and yet it is at least a couple of hundred miles less to drive than going to the Mediterranean.

The site has good toilet blocks, is well laid out, and has a bar and restaurant that serves reasonable, simple meals.  It is only a short stroll from the beach and a little further to walk in to the pleasant small town or along the promenade.

There is a lot to do around here.  La Rochelle, for example is a magnificent old town, with a superb "vieux port".  There are plenty of islands that can be visited, and there are some wonderful beaches.  A lot of this area has vast stretches of fine sand, often backed with pine woods and dunes, to make a really attractive coastal scene.  Several of the islands are now connected to the mainland by bridges, so it is now longer necessary to take a ferry (The Isle D'Oléron for example, which is France's second largest island after Corsica).  Other, smaller islands, still need to be visited by boat, but then when you get there you are on beautiful small islands that are traffic free and can be explored on foot, or sometimes by bike. 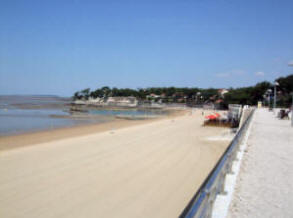 Inland there are some very interesting places, such as Cognac, the home of French brandy.  This is an interesting old town, where a lot of the buildings are black, covered in a small fungus that grows as a result of the alcohol in the air coming from the many brandy producers in the town.

Glyn is right about the distance.  If you start from Calais, then the Med around Montpellier, which is probably the closest, is about 655 miles, whereas La Rochelle is 430 mile.  Over 220 miles less.  His view on the weather is too difficult to answer, as almost everywhere gets some variability in their weather - after all we just had appalling weather in Spain during the club's Get-Together, but the records show that the weather is pretty good here on the west coast of France.  There are also plenty of campsites.  This is actually a very popular area for French holidays, so there are a lot of campsites, especially in places like the Isle D'Oléron.  The site we stayed on this time was an excellent municipal site.  The pitches were a bit varied in size, but generally large.  There was a choice of pitches with shade or none.  The site is right next to the beach but has an excellent swimming pool, which is very useful, as it is worth remembering that this coast is like Weston Super Mare or Southport, when the tide goes out, it is a long way to walk to the water!!  The site has a number of toilet blocks, although some are just toilets, and have no showers.  They are kept very clean.  The site has a bar, restaurant, and they sell a very small selection of groceries and bread from the bar.  The menu in the restaurant is limited, but the food is pretty good.  Most of the pitches are well surrounded by hedges to give some privacy.  There are some statics, but the site is well kept and well-run.  The site is full during the main French holiday period, but seems to have enough space at other times. 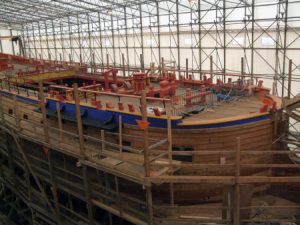 Places to visit nearby are Cognac, and La Rochelle, as already mentioned, but Rochefort itself, which is actually 8 miles from the site, is an interesting old naval town.  They are currently rebuilding L'Hermione, an 18th century frigate, which was famous as the ship that took General La Fayette to Boston, where he helped the Americans win the war against the British in the American Revolution.  The ship was sunk in a storm after a short but notable career, and they are now producing a new version, using the traditional materials, and you can go around the site.  It is in one of the dry docks of the old Arsenal.  They have not built or housed ships here for many years, as the location is in an estuary, and so would not be suitable for modern naval ships.  As well as the rebuilding, there is a Maritime Museum, and the "Corderie Royale", which is the old rope works.  It is similar in many ways to the one in Chatham, which if you have not seen is well worth visiting, but the quarter mile long building looks better than the English version, as it is not hemmed in by other buildings, and it is a fine long old building.  The old town surrounding the Arsenal is also interesting.

In La Rochelle you can do a tour of the three main defence towers (we didn't - too many steps on a very hot day).  The old streets of the town are superb, with well-preserved galleried buildings, and even the modern shops have not imposed.  The harbour is excellent and there is much to see. 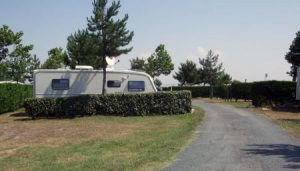 Our caravan on site

There are a lot of interesting off-shore islands.  We visited Isle Madame, where you drive across a causeway, which is flooded at high tide.  This is very peaceful with lots of views.  It even has a campsite, but I would not want to take a VM there, the causeway is very rough and on the island, the road (there is only one) is very narrow.  You would have to like the lonely life to stay on the island.  We also went to the Isle D'Aix.  There is a half hourly ferry service from near the caravan site and it is very interesting island which is traffic free.  You can take your bike on the ferry, although the island is only 3km x 1km, so it is easily walkable.  The island was the home of Napoleon for a short time after the Battle of Waterloo.  He stayed here for 3 nights surrounded by the British, before he decided to surrender.  He was then taken from here to the isolated island of St Helena, where he lived for the rest of his life.  The house where he stayed is now a museum to Napoleon.  It is excellent and you can download a guide in English to the museum on to your mobile phone via Bluetooth before you start going round.  It is very good.  The island itself is superb and there are cycle tracks and paths all over the island.

Of course, the whole coast is full of excellent resorts.  They usually have superb sandy beaches, a lot of dunes, and many are backed by pinewoods.  There is a lot of choice.  This area has a lot to offer, with beach facilities and many places to visit nearby.  As a final benefit, if you are a lover of seafood, then this is one of the prime areas for oyster farming in France and for mussels.  You can have some excellent seafood in this area.  Another bonus.

Perhaps Glyn was right - only you can decide if it is worth a visit for you.