Bourges looks like just any other town in the middle of France, but it has quite a historic past, and has a lot of interest to keep you there for a  few days. 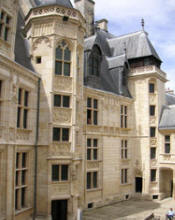 Bourges was the capital of the province of Aquitaine at the end of the Roman Empire, capital of the Kingdom of France under Charles VII, so Bourges carefully maintains its heritage from a glorious past.

A City of art and history, Bourges is proud of its monuments like the Jacques Coeur Palace and the Saint-Etienne Cathedral – included on the UNESCO World Heritage list - of its old streets and its half-timbered houses.

A Green city, Bourges is one of the greenest cities in France with 135 hectares of marshland in the heart of the city and more than 50m2 of parks per inhabitant.

A City of Culture, Bourges is proud of its “Maison de la Culture”, the first to be created in France and of its music festival "Le Printemps de Bourges" - created in 1977 - a true national and international event.

A City at the centre of an area with 100,000 inhabitants, and is the Prefecture city for the Department of Cher. 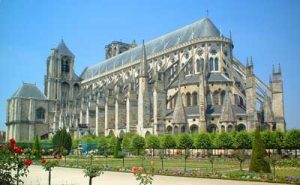 Bourges is fairly close to the middle of France.  It is very close to the A71 autoroute and is about 90kms south of Orleans.  If you are heading to the south of France, particularly the coast around Bezier, or if you are heading to Spain, this route is a very good alternative.  The A71 from the A10 at Orleans heads south to Clermont Ferrand, which then becomes the A75 autoroute and is free all the way to the south, except for where you cross the spectacular Millau Bridge.  It is actually a very good way to go, as it is cheaper (with the A75 is free) and it has some excellent scenery.  The only slight negative is that the A75 does not have so many stopping places as the paid motorways, so you need to plan a little better.  However, it is no worse than any UK motorway.  If you have been to the Loire Valley, it is also an easy journey across from Blois to Bourges.

Bourges has a great Municipal Camp Site, Camping Robinson.  It is inside the town itself and about 15 minutes walk to the cathedral.  The pitches are mostly surrounded by hedges, are hard-standing, and have electricity, water and waste.  There are 80 pitches for caravans and motorhomes, with a further 36 spaces for tents.  The toilet facilities are good and it is very well looked after.  The site has a notice outside about twin axles being charged extra, but we have stayed here twice and never been charged.  It seems to the usual technique to keep out the gypsies.  Staying on site also gives free access to the municipal outdoor swimming pool (June to September).

From the site it is an easy walk into the town centre.  You can either take a path through the woods or go via the streets.  To the south, about 1km through the park there is the Auron Lake.  Created in 1977, the Val d'Auron lake, has an area of 84 ha with angling, sailing, rowing and kayaking.

The large trees and vast lawns around the banks of Lake Auron encourage activity as well as relaxation.  Here, you can play sports such as football, badminton, kite flying, etc or walk along la “Trouée Verte” (the green path leading to the city centre).  There are also tennis courts, a riding school, and an 18-hole golf course.  The island on the lake has become a resting place for many species of migratory birds, which you will be able to learn to recognize with the help of local clubs.  At the southern end, in Plaimpied, you will find a leisure park, a squash court and a picnic area with barbecues.  You can also see the Canal du Berry up to the “Etourneau” lock.

It is the town centre which is the highlight here in Bourges.  This is a good place to visit both in the daytime and in the evening.  During the day you can visit the cathedral, the cathedral park, the old city streets and squares, and there are several museums.  If you prefer it, there is one of those "petite trains" that will take you around all of the main sights and provide a commentary (in English or 6 other languages, including Russian).

Right is the Palace of Jacques Coeur.  This is one of several fine buildings in Bourges and is open to the public.  Born in 1400 into a family of merchants, Jacques Cœur quickly climbed the social ladder to become one of the most influential men of his time.  Knighted by King Charles VII and at head of a vast commercial empire in the Mediterranean, Jacques Cœur decided to begin the construction of his Grand Maison on the old Roman wall of his native town in 1441.  Finished in about 1450, the architecture of his mansion defies classification.  The Flamboyant Gothic facade displays an exceptional decor: hearts and seashells line the window ledges and balustrades, and a large fleur de lys crowns the chapel window. Two statues leaning out of false windows are possibly the master and his wife. In the centre, a stone canopy once held the equestrian statue of King Charles VII.

However on certain evenings (depending on the season), there is a fantastic son-et-lumiere.  You start this in the Cathedral Park, where there is a light show depicting the history of the town and its people.  You then follow a line of blue lights sunk in to the pavement, which takes you on a guided walk through the town.  Almost all of the buildings are floodlit, including the very impressive cathedral, but at a number of historic buildings you pause in your walk for a sound and light show, which explains more of the history.

The Tourist Board says:

This magical event will bathe the most beautiful buildings of the town in light, images, music and emotion.  At nightfall, the Cathedral Saint Etienne will stand immersed in a fantastic display of light, its audacious two-tiered buttresses and magnificent stained-glass windows illuminating the sky.  Guided by the glow of the lighted streets and buildings, you can stroll at your own pace enjoying the rich architectural heritage of this ancient town.  Whilst on this journey, you will have the opportunity to enter into the magical Gothic and Renaissance town houses and also experience the intimate and enchanting atmosphere of the Augustinian Convent where you will encounter a world of dreams and poetry. 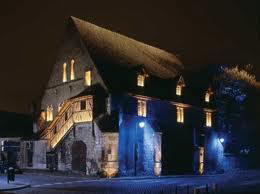 The show is on every evening during July and August, starting at dusk, and every Thursday, Friday and Saturday in May, June & September.  It will take you some 90 minutes to complete the tour and you will walk about 2.5kms.  However, always check with the tourist office that the show will be operating.  Last time we were here we got caught out.  There is a large military base in the town and sometimes they hold military events which stop the son-et-lumiere.  It can also be stopped occasionally for other reasons, so do check, as it would be a shame to miss it.  We made the mistake of asking the Camp Site receptionist, who said it was definitely running when I asked, but he was wrong.  Having walked up in to the town, feeling already worn out from a lot of daytime walking, we found that it was cancelled for that evening!!

The major historic site in Bourges is undoubtedly the cathedral.  This is a extremely beautiful building.  Construction of the cathedral began in 1195.  By 1230 many of the major features were completed, including the nave and the west front.  The cathedral contains a rare array of stained glass windows.

However, the cathedral is not the only fine building in Bourges.  There is the Jacques Coeur Palace (left).  Jacques Coeur was the Finance Minister to the King.  He was born in Bourges and completed this palace in 1450.  There are also a number of other private mansions in the town, such as Hotel des Echevins (the Alderman's House), and the Hotel Dieu.

In the old town area are also some very fine examples of Half-Timbered Houses dating from the middle ages.  There is plenty to see as you walk around the streets and plenty of squares to sit and watch the world go by, or enjoy a drink.

This is a very nice place to spend a few days while travelling to the south, or you can include it in your itinerary that has other locations in the middle of France.