Drifting through the Polders in Spring

In April, the Netherlands come alive with colourful blooms, the touring season starts and the roads and campsites are uncrowded. At this time of year, the famous blooms and flower shows are well worth a tour /visit and we decided that although we had not been able to visit Spain this winter, we were ready for our first visit to Europe.

In late March we crossed the channel through the tunnel and spent our first night at Hotel Bal which is seventeen miles from Calais. It has been reviewed on our website previously and can be booked via the Caravan and Camping Club although a number of our members have booked direct or just arrived. On this occasion we had used the club to book and glad we did as the site was full with many people travelling home from being in Iberia through the winter with dogs and wanting to get over the Channel before Brexit, which was thought to take place on the 29th March but of course did not occur. We enjoyed a good meal in the relaxing atmosphere of the restaurant, as we usually do after a long day travelling to Folkestone from the North-West of England and when we awoke the following morning, most of the site (12 pitches) were empty with people going for early crossings.

On the M20 as we travelled to Folkestone, we were delayed by a long stretch of road-works
narrowing it to two lanes and of course lorries were queuing for both the tunnel and Dover ferries, being diverted to holding areas due to the problems with the French customs allowing free passage. We didn’t have a problem accessing the tunnel but when we left on the French side it was evident that there were queues of lorries both on the motorway and being directed to holding areas and being released in batches.  The following morning as we left Hotel Bal and headed towards Belgium it was evident that there was a major problem as we passed about a thirty-mile queue of lorries on the motorway being corralled by the police with others being on minor roads parked up waiting to join it. One person on the site said they had seen the same from Rouen up to Calais coming from the south.

As we past the Belgium border the problem disappeared and we headed through the country to reach our first stop in south Holland at Kinderdijk which is a Unesco World
Heritage site. There are nineteen windmills in this open-air museum which tells
how the Dutch have been controlling the waters to maintain a dry area. Twenty-six percent of the Netherlands lies below sea level and the windmills have been used for a thousand years to drain the land. You can cycle or take a boat from Kinderdijk to the entrance and spend several hours viewing the working mills, view inside the two museum mills and in the Molenwerkplaats, guides will explain how the windmills operate and are maintained. View details on holland.com The site we stayed at on the marina is only for motorhomes but there are a number of other sites nearby. 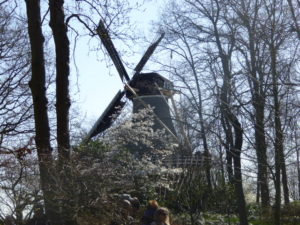 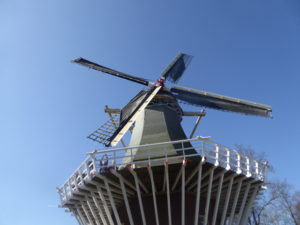 It is possible to also visit Rotterdam by boat from here and the other attractions in
this Zuid Polder area. There is a camp site open all year at De Oude Mass:   www.recreatieparkdeoudemass. 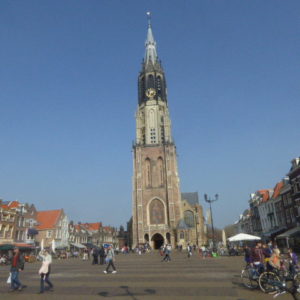 We left Kinderdijk and travelled the short distance (25 miles) to one of our favourite
city’s in Holland, Delft.

The campsite at Delft Hout www.delftehout.nl  is both in the Caravan and Motorhome Club and Caravan and Camping Club Europe touring books but we chose to book through the ACSI which gives discounts at this time of year and were given a lovely sunny pitch, close to the facilities. The site opens in late March and the CCC were just starting a five-week rally and were well down on last year’s bookings.  The site is located in parkland and if you have a bike there are miles of track to follow both through the park, into town and along the polders to villages and attractions scattered about. It is within easy walking distance of both the parkland areas and the town centre, where the waterways, narrow streets and small shops offer the visitor a step back in time but also display current trends in fashion, grocery provision and the usual town variety of outlets. The reception staff all speak English and are always welcoming and enthusiastic to ensure visitors can make the most of their visit by offering information and advise about the area.  The site organises guided tours of the city, cycle tours & offer bike hire, discounted tickets to both the Royal Delft Pottery experience and Kuekenhof Gardens. From the beginning of April, the site has a restaurant serving meals and a bar. It is being replaced this winter with a completely new one and promises to be spectacular. We didn’t use the restaurant on this occasion as it only opened the night before we left. 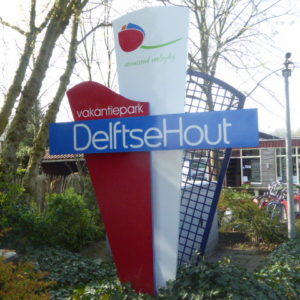 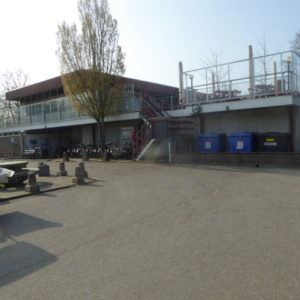 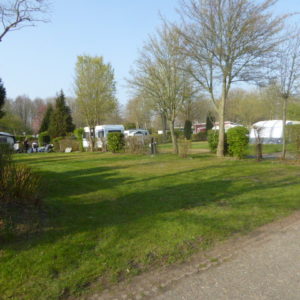 Our next stop was another short hop of 35 miles to Koningshof,  www.koningshofholland.com a site we used over twenty years ago as it is close to the Keukenhof Gardens where we wanted to visit their Spring Bloom show. Discounted tickets can be bought at the site or at Delft Hout. The site is easy to find using a sat nav and following the camping signs. Although the entrance is along a minor road for about half a mile it is easily accessed by even large outfits. All pitches are on well drained grass and allow plenty of space for 640 vans. You can book either a standard pitch with electric or comfort pitches with you own water and drain supply. The facility blocks are well  maintained and offered clean showers, toilets, washing up areas and laundry. The site
offers a gym area, two swimming pools and from April 8th the shop and restaurant/bar open. It was easy to keep fit and enjoy a view over the flower fields. 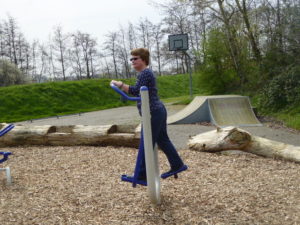 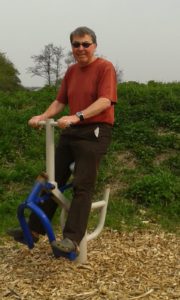 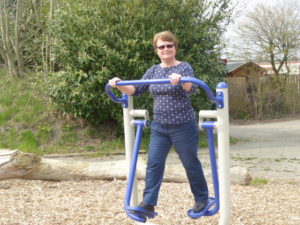 We were rather disappointed by the site as the grass had not been cut, the electric hook up required our pitch to climb through a hedge and the water point had a rather dirty hose attached so we used the taps on the comfort pitches when we needed to top up our supply. There is not a lot to do from the site as opposed to the Delft site and we would on another visit stay at Delft and travel up to the gardens.

We visited the gardens at Kuekenshof for the Spring  Display. This year the theme is Flower Power and the era of  peace, hippies and music.  It was a spectacular show with many very different displays and takes at least a day to meander into all the different style gardens and pavilions. 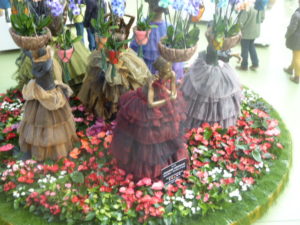 Dressed for the occasion 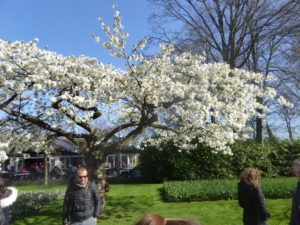 Many aspects to the show 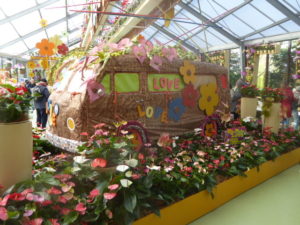 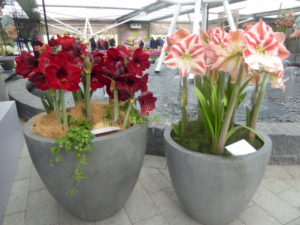 The giants are coming 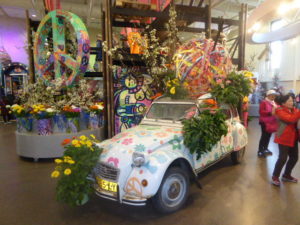 After our three night stay we headed north again towards Allkmar for the Cheese Market which is held every Friday from the beginning of April through the summer season. We stayed about four miles outside the city at a small farm site called Camping Deboekel, the details can be found at https://deboekel.nl/ . The site is beside the canal and situated in a small hamlet with a bus stop outside the site offering public transport both into Allkmar and to a smaller town Uitgeest which is further along the canal.  It is a lovely site with 10amp hook-up and clean facilities. It offers a number of activities such as bike and canoe rental, Dutch Farmers golf, played with clogs on sticks and large football style balls, not quite what we see at Royal Birkdale. 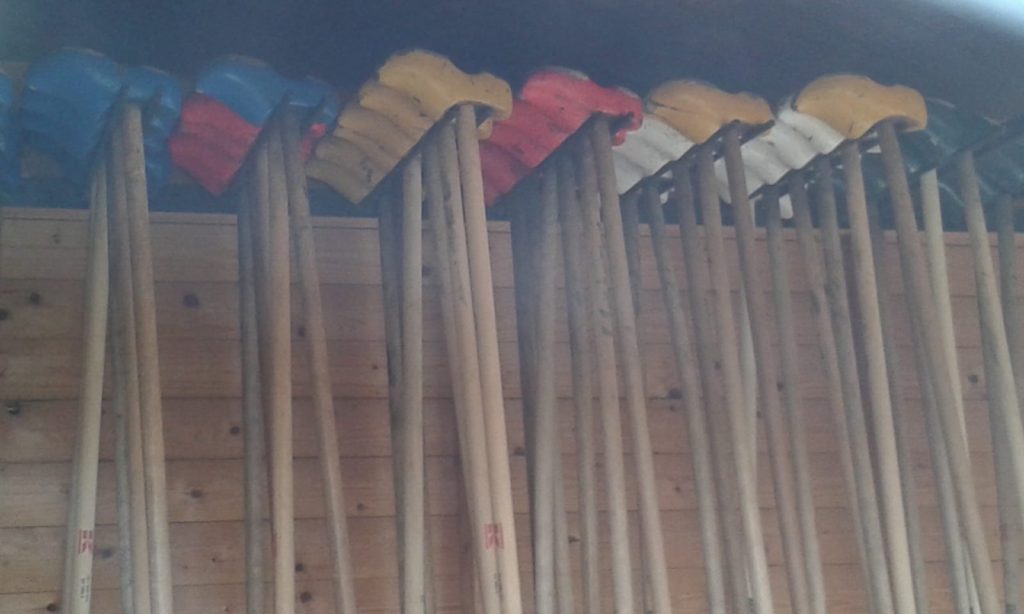 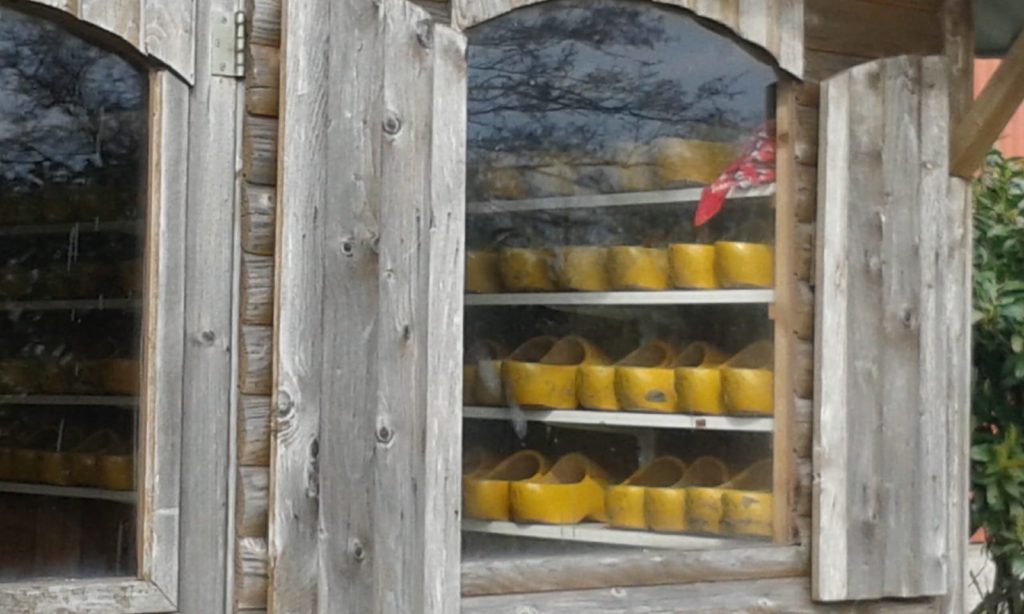 Clogs for the players On Friday’s, the site liaises with a local boat company and offer a cruise to the cheese market, picking you up outside the site in  the morning and taking you right to the market square as the cheese spectacle begins, then in the late afternoon it conducts you on a tour of the town’s canals before returning to the site.  It made an excellent day out and we enjoyed both the cruising and the tourist attraction of the cheeses being auctioned, weighed and carried away by the cheese porters. It is a well worth diversion to any tour of Holland, see photographs below. 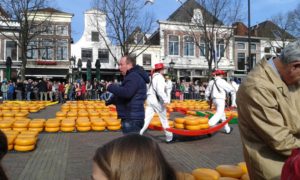 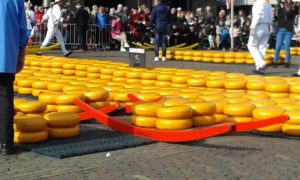 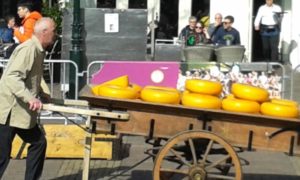 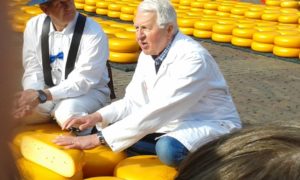 Cheese stalls on the market

While staying at Allkmar we decided to visit the northern tip of this area at Den Helder which is one of the oldest nautical ports in the country is part of a defence line built in the Napolean era and is known as the Gibralter of the north.  It used to be a main port  and in 1945 the town was rebuilt and housed all the Dutch Royal Navy but  the original  fortification fell into disuse but has now been fully restored and houses a North Sea aquarium. Interesting places to visit in the town are the Marine museum, Fort Kijkduin (museum and aquarium) or just wandering the port and town areas. There is an island lying off the headland called Texel (part of the Wadden Islands) which is a World Heritage Site and is renowned for its beaches and bird wildlife. It can be accessed by a  ferry from the port of Den Helder that runs every half hour from 6.30 in the morning until 9 p.m. in the evening.  It costs about 25 euro in the middle of the week. It is a well worth excursion and although we were unable to go this time it is on to do list.

Unfortunately we were running out of time but decided we must stay longer and visit more less well known areas of this inviting and hospitable country. We plan on returning in 2021 and hope that some of you will join us in an event we are currently planning. The return journey was via a short stopover in Delft before reaching Hotel Bal for another lovely meal and overnight stop and then back to the UK with no Brexit.