Slovenia does not have very many campsites, about 50 in total. This is the only site within Ljubljana, although there is another a few miles north. However, despite some rather unique features, this site is very good. Firstly, it is very easy to get to. You can either access it from the H3, the northern ring motorway for the city or from the A2 coming from Germany and Salzburg. If you come off the H3, you turn left at the end of the motorway slip road, travel one mile and the site is on the right. If you get off the A2, it is about 3 miles, but it is simple and the road is fine. 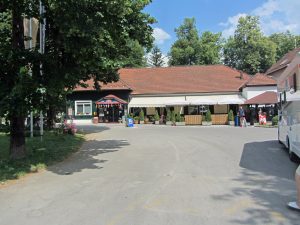 The site has some “unique features” as it is a hotel, a campsite, a massive swimming lido and a sports facility. I had expected a hotel on one side with a campsite next to it, but the two are integrated. Reception is for both the hotel and campsite and the hotel rooms are in a block at the far end of the site, with the bar, restaurant and other facilities next to reception, along with the entrance to the lido and the sports and fitness centre. There is a discount for entry to these.

The site has 177 pitches, but that will be in the peak period. Off peak, with a lot of people parking across multiple pitches, the capacity when we were there was much lower. We had a pitch and a quarter, but some people had three. That is not surprising really, as the pitches are quite narrow, and some are short as well. You could get a car and caravan on easily, but you would struggle to get an awning as well. Quite a lot of the pitches are long enough for large caravans, but many Dutch simply put the caravan sideways and occupy two or more pitches. 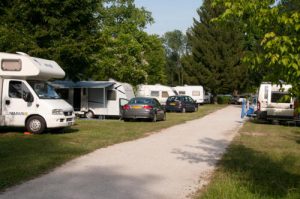 Electricity is 16A, the toilet facilities were OK. They were a little old, but very clean. They are very keen on recycling here, and so you were made very well aware of the need to sort your rubbish in to 6 separate bins, with warnings about €400 fines.

There was entertainment each night we were there, but it did not go on very late, and was normally finished before 10pm, so it was not a problem from noise. There is a railway line next to the site, but it is not very busy and did not appear to have trains at night. However, it was somewhat screened from most of the caravan pitches by the hotel block, but best not to use the pitches on the right hand side at the far end, as the railway crosses over a bridge there. At the weekend you do seem to get a lot of younger people staying, and so it was a little noisier during the night with the odd group returning from a night-out in town at various times. When we were there, they held an international Beach Volleyball Tournament on the Saturday night, with teams from Slovenia, Holland, Italy and the USA. They told us that there would be loud music until midnight, but the competition cannot have been as strong as they expected, as the tournament and the music was all finished by 10:30. The bonus was large numbers of very attractive girls, wearing not a lot wandering around the place!! The standard of the volleyball was actually quite good as we watched it for a while.

The site has the fastest wi-fi I have ever seen on a caravan site. It was very fast. If you go and sit in reception, the bar or the restaurant, then it is free, if you want to use it in your caravan, then it is €2 per day. 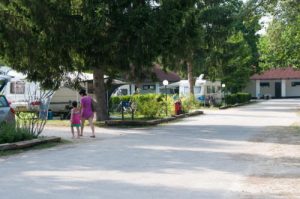 Just down the road is a very good bread shop that stays open from 6am to 10pm, and half a mile further on is a supermarket.

We ate in the site restaurant one night, and the food was OK. We had spit roast pork. It was good and there was plenty of it.

Just opposite the campsite entrance is the stop for buses in to the city centre. You need to buy the Slovenian equivalent of an Oyster card. They cost €2, but you get €1 back when you return it. You can get them from reception. You only need one, as when you get on and put the card against the machine by the driver, you tell him there are two of you. You can put the exact amount of money on to the card for the number of trips you want to take. You can add more money in reception, or at many shops in the city. It was easy to travel, as the route is a straight line from the site, down one road to the city centre, you just get off three stops after passing under the railway station and you are in the heart of the old town. It is also easy as the bus drivers seem to speak English just as well as the bus drivers in our home town!! The buses are every 10 mins, but every 15 mins at weekends, and they run on time. More details of the site can be found on their website [go]
In fact, it is very simple here, as almost everyone speaks English. On the campsite it is basically the first language. There is a huge information board and it is only in English! I guess that makes sense, as there were no Slovenian’s on site. Probably in such a small country, would you come camping here? The Slovene language is also very difficult to follow for many foreigners and English is the common language.

Of course, your first challenge is to learn to spell the name of the city. The key to successes is getting the “j”‘s in the right place, as there are two of them. It took me a little while to stop relying on Spell Check! 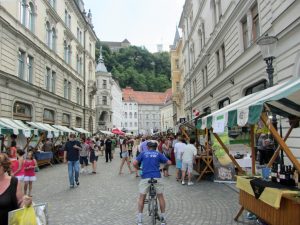 The tourist guide book for Ljubljana says that it is one of the safest cities in Europe. It certainly has that feel to it. It had a lovely atmosphere. It said the only real crime problem was the theft of bikes – surprising as everyone seems to have one. It says your biggest danger is from cyclists. Now that is very true. The Ljubljana cyclists make those in Cambridge look tame. They seem to have the right to go almost anywhere, and do. When a marked cycle track crosses the road, then all of the traffic waits.

The city is quite small, with a population of 275,000, but the centre is wonderful. It not only has a lot of very attractive old buildings, it also has a lot of open spaces and since the street are quite wide, it has an open feel to it. You can easily walk around the most attractive parts, and we hired an audio guide from the tourist office and followed it around the main attractions. The guide is an i-Pod, and as well as an audio commentary it also shows you pictures and video to help you find the various monuments and buildings.

However, there is also a proper guided walking tour in English at least once per day, plus there is a small train tour, boat tours on the river and so on. There are several Tourist Information Centres in the city, so getting information is not difficult.

Having done the tour with the aid of the electronic guide, we felt the need to go back and do it it again properly. The guide went in to quite a lot of history and sometimes that got in the way of admiring the architecture. It was also more difficult to handle the i-Pod in one hand, the paper map in another and the camera, so definitely needed more pictures after day 1. However, our second tour of the city was a Saturday. The place is totally different on a Saturday. It had a fabulous atmosphere, with lots of people, and while we were there it had a Wine Festival. We really enjoyed it, BUT, we agreed that the city and its fabulous buildings had looked so much better the first day, with fewer people around, and none of the stalls for the festival, etc. So, if you can arrange it, do your proper tour of the city on a weekday, and enjoy the atmosphere on the weekend.

Rising over the city is a large rocky mound with a castle on the top. You can take the funicular railway up to the top and get some spectacular views. This is especially true if you buy a combined ticket for the return trip on the funicular, and entry to the Tower and the Museum (€8), then from the top of the tower, the views are magnificent.

On the east side of the centre is Tivoli Park. A large green space with facilities in it, which is the favourite walking and play area for the locals.
One of the reasons for the fine layout of the city was that much of it was destroyed by an earthquake in 1835 and 10% of all of the buildings were destroyed. So, quite a lot of the city dates from that period. Today Ljubljana is the capital of Slovenia, which has been an independent state since 1991, and had previously been part of Yugoslavia since the end of World War II. It is wedged between Austria and Italy and has always been proud of its unique heritage. The city is described as a perfect blend of German, Mediterranean, and Slovenian culture. The old town is a blend of Baroque, Renaissance, and Art Nouveau buildings, watched over by a medieval castle. During WWII the city was occupied by Fascist Italy. The occupying forces established strongholds and command centres of Quisling organisations. The city was surrounded by over 30 kms of barbed wire to prevent co-operation between the resistance movement that operated within and outside the fence. Since 1985, a commemorative path has ringed the city where this iron fence once stood.

Postwar reprisals resulted in a number of mass graves in Ljubljana.

In summer they have a festival. It started 61 years ago, and has got bigger and bigger every year. Its main period is July and August, but there are lot of events in late June as well. The events draw large crowds. On the Friday evening when we were there, they were setting up a massive stage in the centre for an outdoor concert. There are events most days during the festival period.

One thing to remember in Slovenia – it is a legal requirement to have dipped headlights on at all times when driving, and all caravans are limited to 80kph on the motorway. Prices in Slovenia are mixed. They adopted the Euro currency in 2009, having first joined the EU in 2004. Diesel in Ljubljana is €1.345/litre (£1.15), some prices are lower than the UK, and some almost the same. I checked some electronics and it was slightly higher than in the UK, and branded clothes were about the same. Some food products are cheaper. Eating out was a little cheaper.

If you want to stay here and use it as a base, then Lake Bled is about 60kms away, and there are a lot of other places to visit in s relatively small radius. We crossed Slovenia on the trip, and used two routes, and the scenery throughout the country was fabulous, even from the motorways. It is a country and a city well worth putting on your list of places to visit.